The word rash is a general term that can refer to a variety of skin eruptions. The symptoms or lack thereof, the appearance of the rash, location and duration are useful in arriving at a diagnosis.

Eczema (atopic dermatitis) is associated with a history of dry, sensitive skin. Often there is a personal or family history of asthma or seasonal allergies. Cleansing your skin gently with a soap free cleanser and moisturizing liberally and regularly are key to preventing eczema flares. When flares of itchy red areas on the skin do occur treatment with a topical steroid appropriate to the location on the body is often needed. 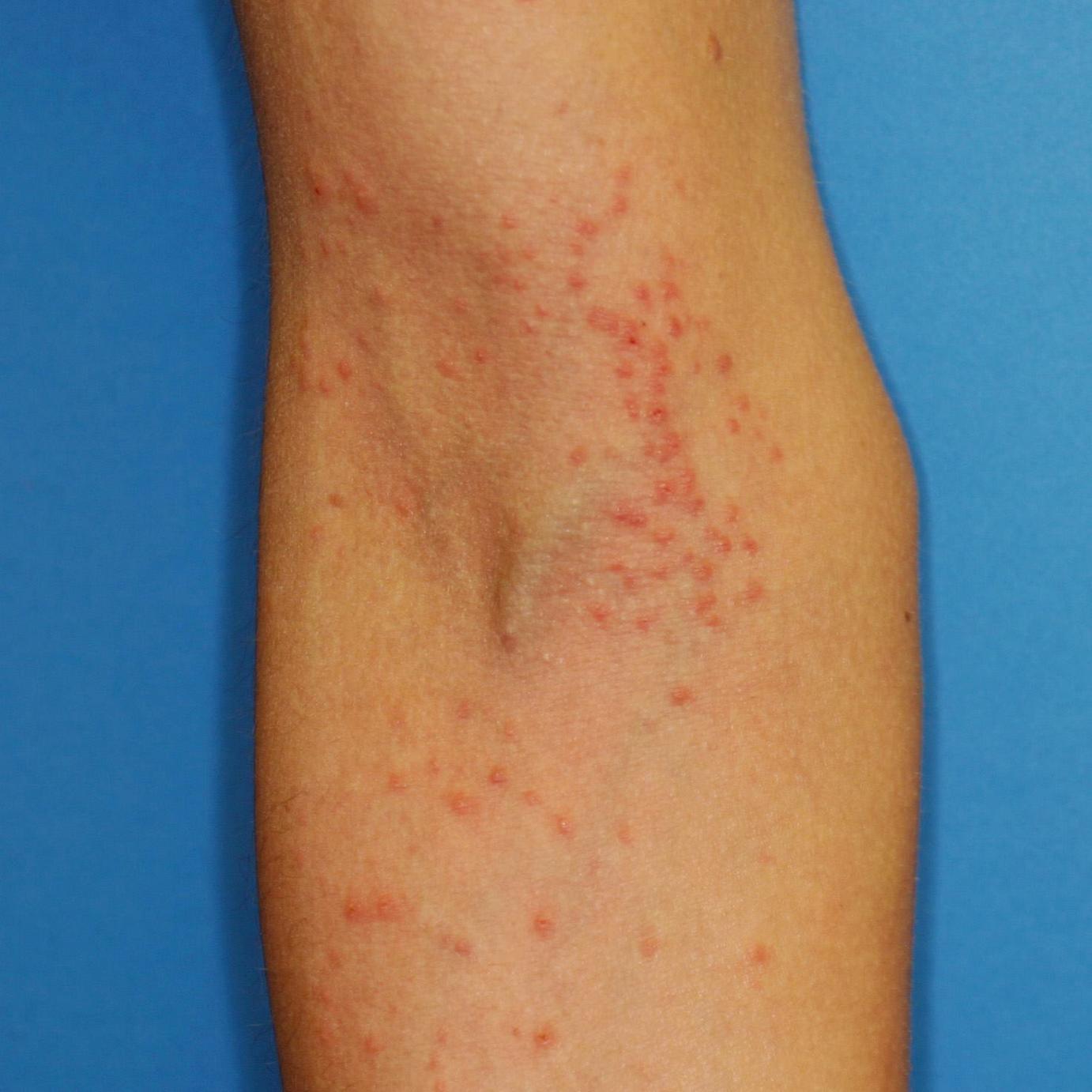 Rashes for which itching is not a predominant feature include psoriasis, fungal infections and viral exanthems. Psoriasis presents with red patches with silvery scale typically on elbows and knees. While psoriasis on these locations usually does not itch, psoriasis on the scalp can be itchy. Psoriasis often has a hereditary component. Treatment is based on how much skin is involved and can include use of topical steroids and Vitamin D analogues, light treatments, oral or injectable medications.

Fungal skin infections commonly known as ringworm appear as a ring of scaly red skin. Sometimes little bumps can be present along the edge. Itching is often present but not intense. Sometimes a skin scraping has to be taken to confirm the diagnosis. The problem can usually be treated with a topical antifungal medication.

Viral exanthems are rashes caused by a systemic viral infection. They usually are not itchy. These rashes tend to resolve with time without the need of treatment.

Appearance is another important clue in identifying a rash. A poorly defined area of scaly red skin often suggests eczema (atopic dermatitis), well defined thickened scaly plaques suggest psoriasis, scaly ring-like lesions suggest a fungal infection, pus-filled bumps suggest a bacterial infection, small blisters can indicate a viral infection like fever blisters or shingles; insect bites or contact dermatitis. Of course this is just a sampling of the many ways a rash can present and less common causes also need to be considered.

The location on the body provides a valuable clue. Common sites for a fungal infection are the groin and the feet; psoriasis often affects the elbows, knees and scalp; eczema (atopic dermatitis) commonly involves the inside of the elbow and the area behind the knee in children; fever blisters occur on the lips; rashes brought on by the sun affect sun exposed areas of the skin; seborrheic dermatitis affects hair bearing areas, ears and face.

Duration of the rash is an identifying characteristic. New onset itchy rashes may indicate a contact dermatitis whereas rashes that have come and gone over a period of months or years would more likely denote atopic dermatitis, psoriasis or seborrheic dermatitis.

These general guidelines can provide some clues to the diagnosis but rashes need to be seen and sometimes felt to arrive at an accurate diagnosis. It is recommended that you make an appointment with a trained skin care provider for assessment of your rash since different rashes can have a similar

Please feel free to use the blog below to share information about Rash or to ask Dr. Franziska Ringpfeil a question that might be of interest to others.

Would you recommend us?

Compare our service to other similar practices

The doctor listened to you attentively

The doctor took time to answer your questions

Friendliness of the staff during appointment

What WE DID WELL

I really appreciated the friendliness and attentiveness of the doctor, medical assistants and office staff.

Office ambiance and the how attentive everyone is in the office.

I admired the advanced technology used by the office. I am all for the use of technology.

No wait time for appointment - attentiveness of PA

The unhurried time spent by everyone

I liked all rthe art work that was hanging up in the hallways. I also liked how friendly everyone was. It seemed as though they all wanted to be here. Some times at otjher places the people at the counter can be disrespectful. Not here. The or was very caring and explained the treatment in terms that we could understand.

I was very please with the service when setting up my appointment, and when I called back with questions concerning my insurance. Very pleasant and accomodating staff!

Beautiful offfice. Doctor was thorough but quick, which was great

I was made to feel comfortable and was happy that I felt listened to and as though my needs were addressed. I feel confident that the doctor is determined to assist me with my multiple issues. The medical assistant and receptionist were also very helpful and welcoming. Thank you.

What can we do better?

More upbeat music! The warm temperature and the John Mayer-esque music made me feel as if it were bedtime =)

Improve the movement of the mouse on its pad.

Cookies and Milk! Seriously, I love coming in and being seen promptly. More importantly, I like the fact that the doctor was not distracted and there was not a single interruption.

More upbeat music! The warm temperature and the John Mayer-esque music made me feel as if it were bedtime =)

All my concerns were addressed, I was pleased.

Everything was well above my expecatations.

I am a little annoyed that I called to say I was on my way and I was told that I may not get here in time and will probably have to reschedule. Then when I got here, I filled out the paperwork then had to wait 20 minutes to be seen. It would be nice to know the receptionist's name so I know who I am calling when I have questions. It would be nice to have WiFi available during the wait.