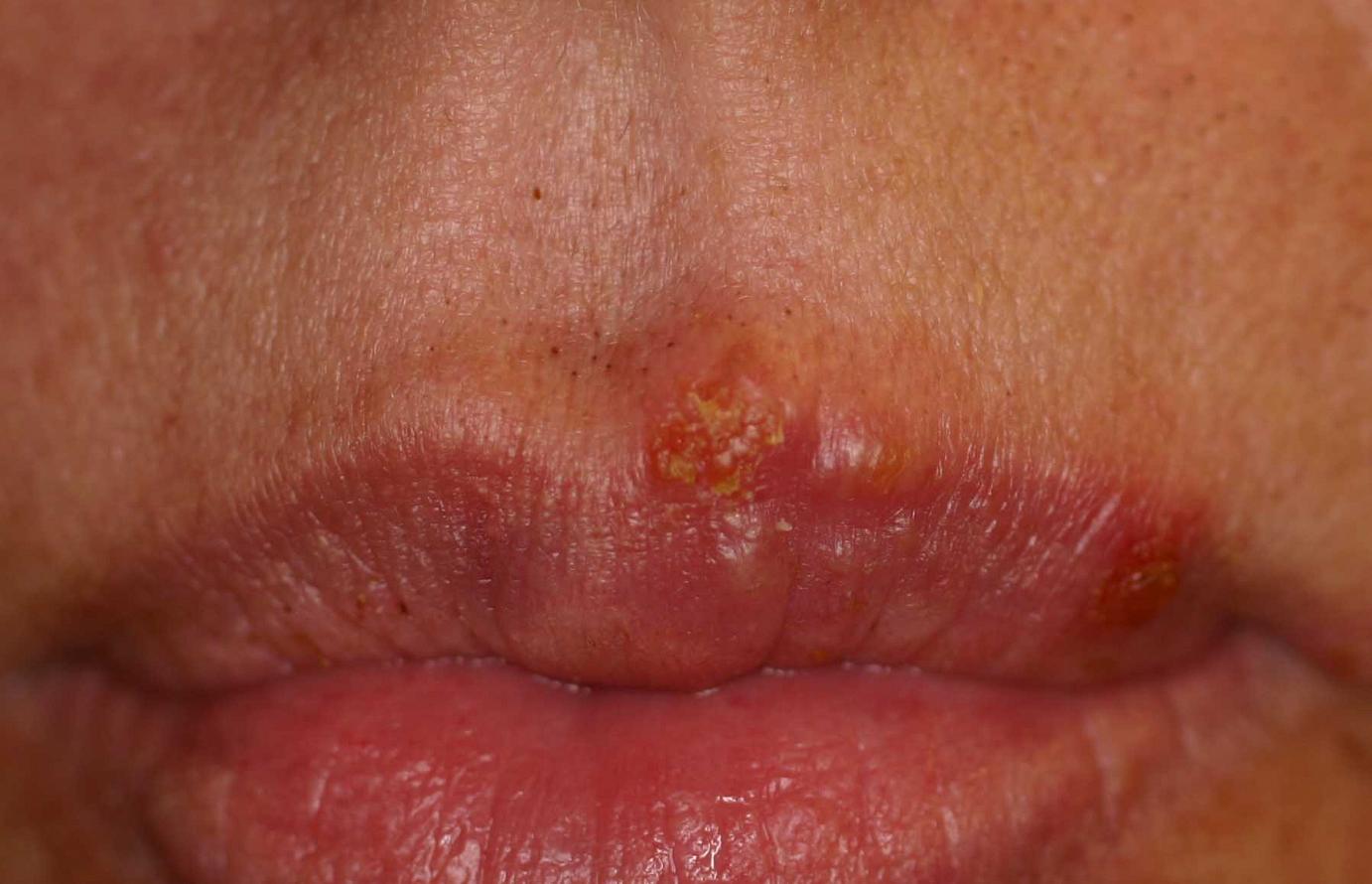 The initial infection (primary stage) of oral herpes is generally asymptomatic and is acquired through person to person contact such as kissing. The virus then lies dormant in a nerve root. Reactivation of the virus may be caused by a number of events such as a fever, intense sunlight, intense cold, or stress. In the active (secondary) stage, individuals with oral herpes have "cold sores" around the mouth or on the face that may become painful ulcers. The early period immediately before the outbreak is referred to as the prodromal period and from this time to the end of the outbreak, the virus can be transmitted to another person by direct contact.

The stages of genital herpes are very similar to oral herpes with an initial stage that manifests with few symptoms and is less contagious. The secondary stage, which can occur unpredictably but is usually mediated by stress or sickness, shows lesions on the vulva or penis. The lesions are often painful and itchy may also be accompanied by difficulty urinating, lymph node enlargement with tenderness, and puss like discharge. The herpes virus is most contagious during the active periods but can spread immediately before the outbreak occurs.

For both genital and oral herpes, the dormancy period involves the virus "resting" within the nervous tissue around the initially infected area.

Herpes is commonly diagnosed based upon the symptoms described above paired with frequent recurrence in the same area. Rapid tests have been developed to detect antibodies to the herpes virus. Positive results reveal that you have been exposed to HSV1 or HSV2 in the past. However, 90% of inner city populations carry HSV1 antibodies and about 35% carry HSV2. Presence of antibodies does not diagnose a current outbreak. In some instances, samples of representative lesions are taken and tested for the presence of the HSV1 or HSV2 virus.

Once diagnosed with herpes, managing the disease includes caring for sores during outbreaks as well as preventing their recurrence. Several medications and dietary guidelines are outlined below as well as advice on how to prevent spread of the disease.

While there is no cure for herpes, a few medications are available for control. Famvir™, Valtrex™ and acyclovir are currently used to treat and prevent cold sores and genital herpes. None of these drugs cure the disease but all help alleviate or prevent symptoms. In addition to medication, you should keep lesions as dry as possible to speed healing. Diet can also play in important role since the amino acid lysine, found in fish, chicken, beef, lamb, milk, cheese and beans, has been shown to reduce the recurrence of outbreaks. Some people feel that they can stop outbreaks by daily lysine supplementation. Condoms help prevent the spread of herpes among individuals.

Remember, if you have been infected with herpes, you are not alone. The disease affects many people who live normal lives. Especially with genital herpes, the ulcers are concealed and do not affect any daily activities. Open communication with partners is important so that both of you can practice safe intercourse. In the middle of an outbreak, you should avoid contact, and medications can mitigate symptoms.

Since genital and oral herpes are extremely common in the United States, with an estimate of 45 million people or one out of every five infected, there are many places to turn for support.

Please feel free to use the blog below to share information about Herpes or to ask Dr. Franziska Ringpfeil a question that might be of interest to others.

Would you recommend us?

Compare our service to other similar practices

The doctor listened to you attentively

The doctor took time to answer your questions

Friendliness of the staff during appointment

What WE DID WELL

Physician was very excellant in explaining treatment and cause of skin problem.

The doctor's exam was thorough and gentle. The music was pleasant and soothing.

Appreciated the time the doctor took with me and the fact that she discussed fees in advance of services. Bottom line: excellence in every way.

Ability to use computer to fill in info

the artwork on the walls

What can we do better?

No complaints at all, but since you asked, receptionist today could have been "warmer"

Just keep doing what the company is doing and yall will be fine. no problems at all i will refer anybody to this compnay

Being able to get an appointment at the time of the outbreak.

Just continue to be as thorough and caring as my experience today. Quite like a breath of fresh air!

you can not top anything. this is the best run office and staff that I have ever been in.

I am very satisfied with my experience at Ringpfeil Dermatology. I travel to get here and it is worth the drive!

This visit was great.